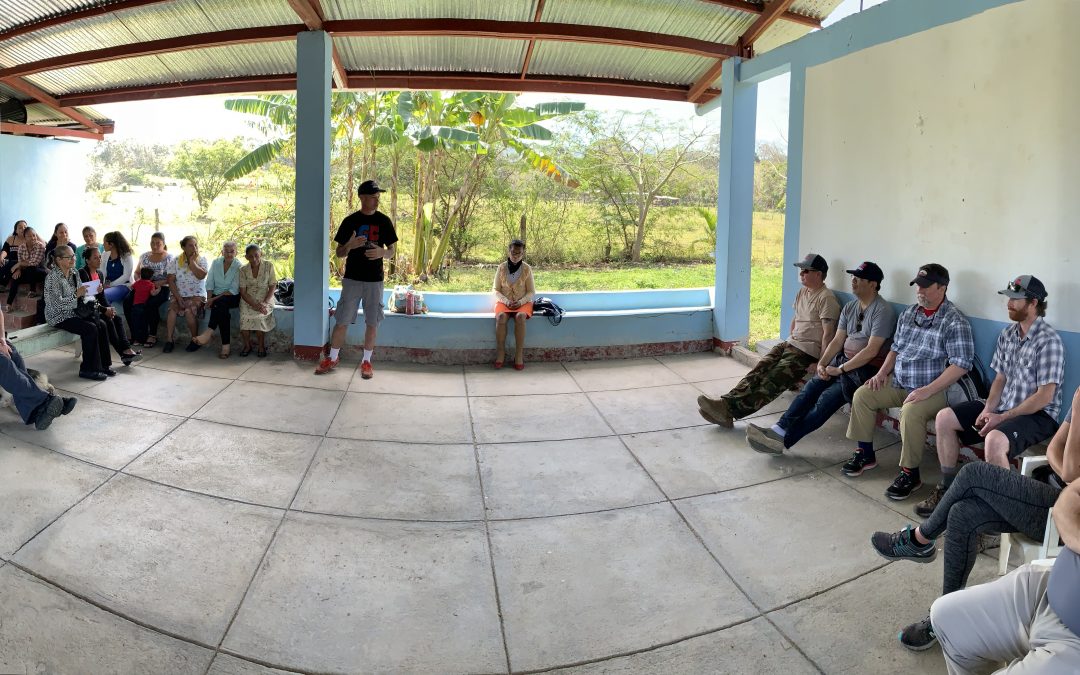 Let us organize hopes…
Possibilities that can’t be dreamed by computers.

Los Robles, Nicaragua February 6, 2020. In the open air meeting area of the local clinic, a group of community health promoters, known as “Brigadistas”, led a group of very interested foreign visitors through their experiences, values, and hopes for their community of Los Robles; which sits in the Northern highlands of the Department of Jinotega in Nicaragua.   They are practicing experts in the field, and the driving force for health and well-being in their community.  My role was as a board member of Comunidad Connect (CC), a non-profit partner of the Brigadistas. For several of us visitors, it was not our first time meeting them, so we knew that these occasions were always very warm and meaningful. As a group, they have always been disarmingly welcoming and genuine.

This gathering was part of the week long, 5th Annual Health Summit, hosted by Comunidad Connect (CC). The group of visitors included CC staff from the USA and Nicaragua, Board of Directors, academic partners from Georgia State University and the University of Alabama; and the Executive Director from CC’s regional partner organization, “Health Horizons International”, in the Dominican Republic.  These visitors also represented a growing international network of partners committed to community health in the Global South.

Currently, everything in Nicaragua is in the context of “the crisis”. It began in April of 2018 when public protests of the President were met with violence, and essentially forced a stalemate between Nicaragua’s public and private sectors.  Over 300 people died, and thousands of protesters we imprisoned. The social unrest dimmed the national economy to virtual collapse, resulting in widespread unemployment and food insecurity.

Doña Daysi is a Brigadista with 40 years of service to her community. During the meeting, she expressed how within the context of the crisis, medications are becoming less available, and alcoholism and smoking are on the rise. Access to food for single mothers and seniors living alone is also a growing concern. The Brigadistas are currently working with CC and the Nicaraguan non-profit, Sociedad Civil Comunidad Connect (SCCC) in a “Food for Good” program that brings meals to those that need it most.

There are a number of veteran Brigadistas,, like Doña Daysi, that have been in this role within the community since a woman’s organization mobilized a health “brigade” to help tackle a severe Malaria outbreak during the Civil War of the 1980’s. Over 100 volunteers from this tight-knit community came together to take blood samples, treat the sick, and help fumigation efforts.  The Brigadistas as we know them today were formed during that time of tremendous human need. (Historic info from an interview with Daysi in the CC blog). 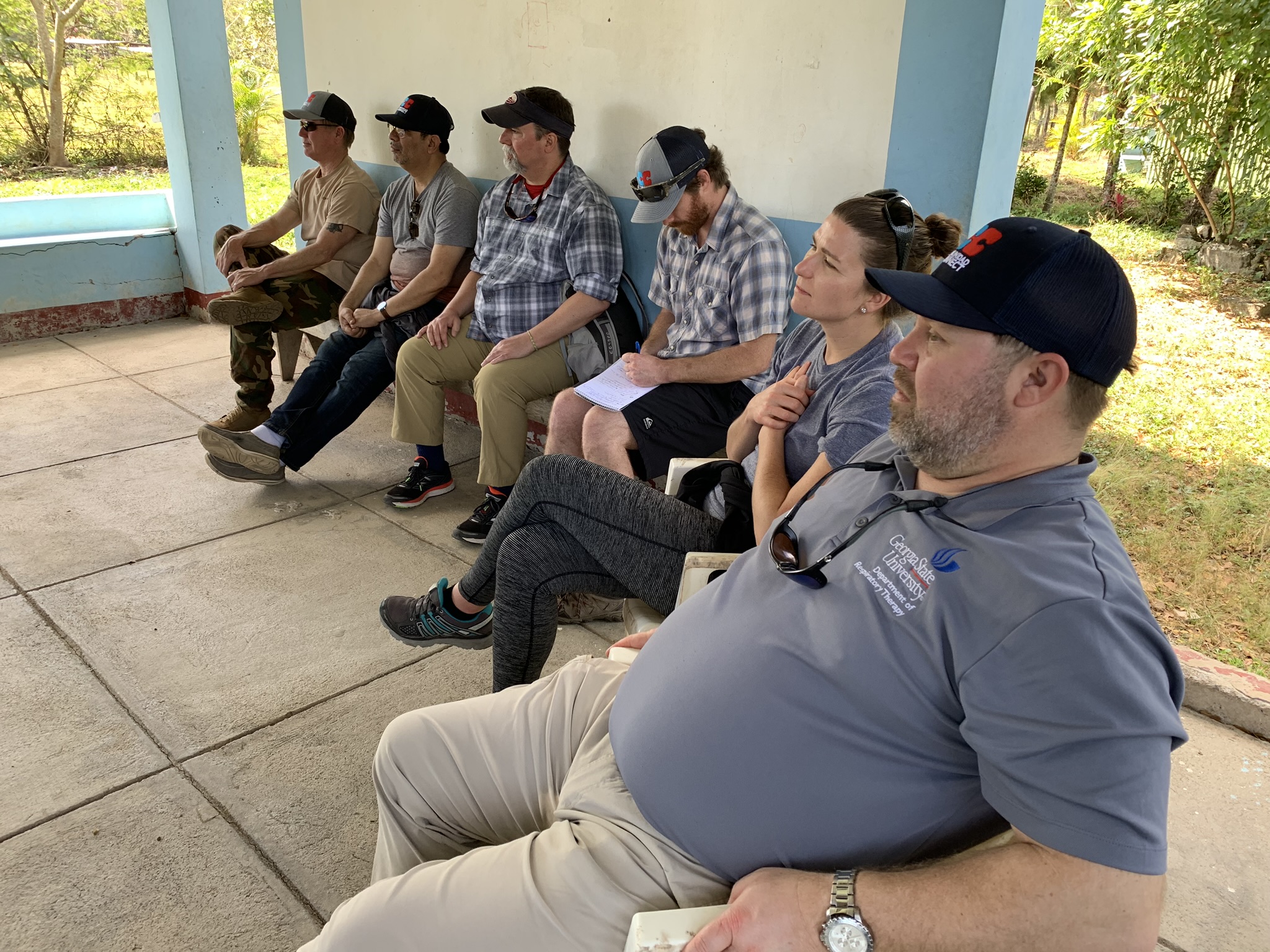 It’s noteworthy that they are an autonomous organization, non-governmental. They receive some monthly training from the Ministry of Health, but no funding. They mentioned not being paid as an important tenet of their organization; that if they were compensated, more people would want to become brigadistas, but they would be doing it for the money instead of for the right reasons. Other essential values they emphasize are transparency and equity, in that everybody has a voice, and everybody has a chance to contribute.

In response to seasonal Dengue outbreaks, Doña Daysi shared how the Brigadistas led a community wide prevention effort by rallying residents to make sure there was no standing water in or near their homes in order to keep mosquito numbers down. Mosquitos are the vector for the disease and need standing water to reproduce. The Brigadistas went door to door, by foot, and then continued to follow up again, and again.  Their neighbors would jokingly say, “Why are you bothering me so much!?”

Along the way, they noticed a trend and a tipping point in the neighborhood; once there was a certain number of households making the change, the idea would catch on, spreading from neighbor to neighbor. As a result, last year they had zero cases of Dengue, which is unprecedented in Los Robles, and they attribute their success to their relentless “bothering” of their neighbors and community. The Brigidistas expressed that when trying to intervene in and change family behavior, for example preventing Dengue, they rely on persistence and sweetness.

Their family planning program, in conjunction with the Ministry of Health, has also gained momentum, in response to unplanned and forced pregnancies.  It pained them to see young single mothers, already struggling to feed the mouths they have, unwillingly becoming pregnant again. They talked about it as a cycle of poverty that needed interruption. One Brigadista knew a single mother that is 30, whose 14 year old daughter just became pregnant.

Doña Petrona is the oldest Brigadista, and has been a member for 25 years.  She spoke of a woman with a mental disability, as another example.  This woman continues to get pregnant, but does not have the capability to care for her children, thus the responsibility falls on her family, that is already struggling economically through “the crisis”.  Providing the option for the woman to have her tubes tied could be beneficial, however; the hospital in Jinotega won’t operate without a signature and consent from the woman’s husband, and if she’s single, then from the father of her children.

Birth control is currently offered and available as an injection given every 3 months. Still, one remaining challenge is maintaining confidentiality for the young women accessing birth control services. For example, in Los Robles, they may not want to be seen going in for an injection for fear of being the subject of town gossip. However, as the Brigadistas have witnessed, if the young women don’t access these services, than they are likely to show up pregnant. If they are aware that a young woman hasn’t come in when they’re due for their injection, they sweetly but persistently, show up at their homes. Since the program has become so effective in Los Robles, they are spreading it to their neighboring communities.

Their stories highlight their responsibilities, which are countless, and are carried with them every day. It is clear their strong identity is deeply rooted and galvanizes their organizational culture, and pride and respect in their positions. There is a certain poise and grace held within the senior members that is clearly reflected throughout the younger generations in the organization.

Johnathan Steppe, from Kennesaw State University, tele-presented his research the day after we met with the Brigadistas as part of the Health Summit. His study, entitled: “Exploring the Experiences of Dominican Community Health Workers Using Photo Voice” was conducted in 2019. He equipped Community Health Workers (CHWs) in themunicipality of Montellano with cameras and asked them to describe their experience as “Promotores de Salud” with photos, and afterward discuss their significance via journals, interviews and focus groups.  We learned that the Promotores in Montellano have essentially the same role as the Brigadistas in Los Robles, and shared very similar experiences, organizational structure, and values. They too are not compensated beyond a transportation stipend; saying that money would undermine their sense of altruism. They too expressed their dedication to fill critical needs in their community: they are leaders, teachers, guides, advocates, and agents of change. The photo voice study revealed and confirmed how difficult and discouraging it is when change does notn’t happen, or does no’t happen quickly. Another take away from Johnathan’s presentation was that there is a gap in academic knowledge of the effects of community health workers on the health of the global South.

Well-organized and compassionate people, like the Brigadistas in Los Robles and the Promotores in Montellano, are beacons of hope; not only to the communities they serve, but for the rest of us that are looking for it too.